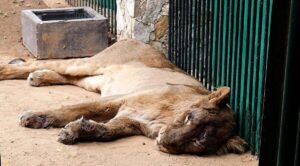 A year after the Sayajibaug zoo lost its lioness, Gayle, the zoo lost its two-and-a-half-year-old lion, Samrat to a chronic kidney ailment Thursday.

The zoo curator confirmed that Samrat had been diagnosed with a kidney ailment a week ago while undergoing treatment for an injury.

The Sayajibaug zoo is in mourning after losing Samrat, who along with his mate, Samriddhi, were brought in from Junagadh in December 2021 as cubs.

Patankar said, “Since Samrat and Samriddhi share an enclosure and were getting along very well, one of their playtime encounters had left Samrat with an injury on his shoulder. When we spotted the injury, we began treatment but he went off-feed… Since we did not want to take chances, we undertook a blood test for him on Saturday, last week. His creatinine, urea, and phosphorus levels were beyond normal, along with other vital parameters, indicating a chronic kidney ailment.”

The zoo authorities then contacted the Anand Veterinary college to start treatment for the big cat. As per the written advice of a team of veterinarians from Anand, who had visited the zoo on Sunday, Samrat was hospitalised at Anand.

Patankar said, “The team that visited us on Sunday advised that he should be admitted for better treatment. We did do on Monday and one of our teams was deployed there… But, the doctors said they would not give us false hope as the kidney malfunction was irreversible. He was very cooperative during the treatment and we tried to feed him broth and meat soups, hoping for recovery… But we lost him on Thursday afternoon.”