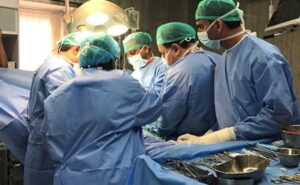 Patna: A poor Dalit woman in her early 30s is battling for life after both her kidneys were allegedly removed at a private nursing home in Muzaffarpur district on September 3 amid Bihar deputy chief minister Tejashwi Yadav warning all primary health centres, district hospitals and medical colleges to improve their services or face action.

Sunita Devi, a mother of two from Mathurapur village, under Sakra block, was rushed to Subhakant Clinic early this month following stomach pain. After examining her and conducting ultrasound, doctors asked the family to immediately admit her for a uterus removal operation.

However, Sunita’s body swelled and she complained of uneasiness and extreme weakness after the operation on September 3. Sensing trouble, a doctor at the clinic advised her husband Aklu Ram to take her to Patna for better treatment.

“A day after the operation, her body swelled and she developed other health problems. A doctor advised us to rush her to Patna for better treatment. She was shifted to a private hospital in Patna in a vehicle arranged by the clinic,” Ram told Newsclick from Muzaffarpur.

However, the family was in a shock 24 hours later when they admitted Sunita to Patna Medical College and Hospital (PMCH) after the private hospital “refused to treat” her and asked them to “consult a government hospital”. “We took her to Patna Medical College and Hospital, where doctors performed some tests and ultrasound and informed us that both her kidneys were missing. We were shocked,” Ram added.

According to Ram, PMCH doctors asked him to take Sunita to a kidney hospital for treatment. Subsequently, he returned to his village and consulted Muzaffarpur-based SKMCH and Sadar hospital but of no help.

Ram, a landless farm labourer, said that Sunita’s condition is deteriorating fast. “Her body has swollen and she is unable to digest food. Her condition is critical.”

Mentioning the expenses he had to incur for the treatment, Ram said, “First, I deposited Rs 30,000 at the clinic for the operation and later Rs 20,000 at private hospital in Patna for treatment. I took loan from a moneylender on high interest to save the life of my wife.”

Sunita’s mother Terri Devi has lodged an FIR against the clinic’s doctors, including owner Pawan Kumar, at Bariyarpur Police Station. Station house officer Rajesh Kumar told Newsclick that the FIR was lodged under the Transplantation of Human Organs and Tissues Act, 1994, and the Scheduled Castes and the Scheduled Tribes (Prevention of Atrocities) Act, 1989. The complaint was forwarded to Sakra Police Station for further action.

Muzaffarpur civil surgeon UC Sharma said that he has directed the Sakra health officer-in-charge to probe into the allegation and verify the clinic’s registration and degrees of the doctors involved in the operation.

According to Kumar, the clinic neither has its registration number nor the degrees of its doctors displayed on a board. Locals alleged that the clinic is run by self-proclaimed doctors. The doctors are absconding and the clinic is shut, the police said.

Sunita’s horrible experience has exposed the ground reality of basic health care in rural Bihar. Contrary to the state government’s claims, the health infrastructure remains poor with thousands of patients, primarily poor and marginalised, visit OPDs and return without treatment due to unavailability of doctors and defunct ultrasound and X-Ray machines, etc.

As per local dailies, in the last one month since the new Mahagathbandhan government was formed, hundreds of patients who queued up for hours at Sadar hospitals in different districts had to return without even basic check-up as doctors were absent. Similarly, several seriously ill patients could not be hospitalised dye to either unavailability of medical staff or lack of equipment.

Most primary or community health centres are non-functional and even district hospitals are facing shortage of doctors and  basic medicines.

The fact was highlighted by the Comptroller and Auditor General of India (CAG) report presented in the Assembly in March, which said that government hospitals, mainly in districts, have lack of resources and workforce. The number of doctors, nurses and other paramedic staff is also significantly less.

The CAG report also exposed the state’s unpreparedness during the first wave of the pandemic in 2020. “There was a persistent shortage of doctors, nurses, paramedical staff and technicians in Bihar from 2014 till 2020 but the department did not publish the vacancies to get them filled,” the report said.

As per the report, there is a shortfall of beds at hospitals ranging from 52% to 92%. The number of beds was not raised to the sanctioned level even after a decade has passed.

A CAG audit of hospitals in the districts of Biharsharif, Hajipur, Jehanabad, Madhepura and Patna from 2014-15 to 2019-20 showed that they hardly provide patients with basic health facilities. Much to its shock, the audit team found street dogs, pigs and open drains on premises of the hospitals.