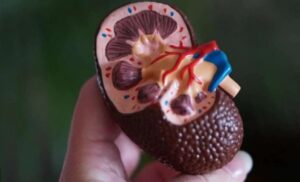 NEW YORK:  According to a study led by an Indian-American researcher, the steroid hormone aldosterone, which is known to avoid dehydration by controlling salt and water in the body, is associated with a higher risk of kidney failure in people with chronic kidney disease (CKD).

The adrenal glands, which are located above the kidneys, release the steroid hormone aldosterone. It is crucial for regulating blood pressure. However, consuming too much of it can cause kidney, cardiovascular, and high blood pressure disorders.

The research, which was published in the European Heart Journal, demonstrated that patients’ diabetes status had no bearing on their chance of having CKD worsen and progress to end-stage kidney disease.

The research, under the direction of Dr. Ashish Verma, Assistant Professor at Boston University School of Medicine, US, examined the relationships between blood aldosterone levels and the progression of kidney disease in 3,680 people between the ages of 21 and 74.

They concentrated on CKD development, which was defined as the occurrence of end-stage renal disease or a 50% loss in the kidneys’ capacity to filter blood through the glomerular blood capillaries (known as the estimated glomerular filtration rate, or eGFR). 1 412 (38%) of the individuals experienced CKD development over the course of the nearly ten-year follow-up.